How We Made a 26% Return with Tiffany Bonds

Much has happened since we recommended Tiffany bonds (Tiffany 4.900% '44, CUSIP 886546AD2) on September 5, 2019.  When we recommended the Tiffany bonds, we saw a company with a strong balance sheet and disciplined capital allocation but with mixed recent results.  The bonds represented a compelling risk-reward opportunity given the Tiffany bonds' high relative credit spread and yield to maturity compared to other bonds available in the corporate bond market.  In short, we believed there was upside in the Tiffany bonds.

Why We Recommended the Tiffany Bonds Due in 2044
As shown in Figure 1, when we recommended the Tiffany bonds, the company's leverage ratio (total debt divided by Tiffany's EBITDA for the last twelve months) was a low 1.0x.  A large portion of bonds rated investment grade, or at least Baa3 / BBB- by Moody's and S&P, generally have leverage ratios between 2.0x to 3.0x.  Most of these bonds, on our September 5, 2019 recommendation date, had yields to maturity (YTM) materially lower than the Tiffany bond's 4.70% YTM, which made the Tiffany bonds a compelling relative value.  Further, the Tiffany bonds' 2.71% credit spread was higher than that of comparable bonds.  To put this spread in perspective, on October 4, 2019, we issued a sell recommendation for BNSF 3.90% 8/1/46 bonds (CUSIP 12189LAZ4) after achieving a total return of 17.18% over seven months.  The credit spread on the BNSF bond was only 1.12% but its leverage ratio was 2.2x, more than double that of Tiffany.  The BNSF spread compared to the Tiffany spread further illustrates the compelling value of the Tiffany bonds.

Finally, on July 31, 2019, Tiffany had $681 million of cash compared to $1,027 million in debt, which provided us further comfort in the strength of its balance sheet.

Nowadays, many companies with strong cash flow burn through significant portions of their earnings with misguided and, often times, activist-investor-driven share buybacks.  Some successful companies, such as Apple, can get away with these given their huge level of earnings, but, when we evaluate a new bond investment, a company's capital allocation is a key piece of our analysis.

For example, suppose we evaluated two bonds with the same price, maturity date, and yield to maturity.  If the issuing companies' leverage ratios were similar, we would look to the issuers' capital allocation to decide between the two bonds.  If one company is blowing most of its cash flow on share repurchases while the other has a more disciplined approach, the choice between the two bonds becomes clearer, as the latter company should improve its creditworthiness over time.

As shown in Figure 2 below, for the six months ending July 31, 2019, Tiffany had a disciplined capital allocation policy, with only a limited amount of share buybacks -- $85 million out of its $486 million in EBITDA, or 17.5%.  Capital expenditures, also known as "capex," represent long-term investments in the business that are not expensed on a company's income statement.  From a capital allocation standpoint, we view capex much more favorably than share repurchases, as Tiffany's capex could include opening new stores or remodeling existing stores, both of which should be a positive for the company.  Share repurchases, on the other hand, make cash disappear with no value other than lowering the denominator in a company's earnings per share calculation. 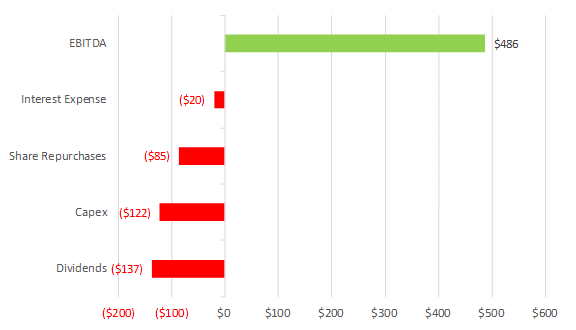 Tiffany's strong balance sheet and disciplined capital allocation were extremely important, as its recent financial results had been mixed.  For the twelve months ended July 31, 2019, revenue and EBITDA fell 3% and 8%, respectively.  These lackluster results contributed to the bond trading at a compelling value.  Since the results were weak but not terrible, Tiffany's balance sheet and capital allocation outweighed its recent operating performance in our eyes.  As a result, we recommended BondSavvy subscribers buy the Tiffany bonds due in 2044 at an offer price of 103.01 on September 5, 2019.

A big part of maximizing bond returns is selling bonds when we believe a recommended bond has little upside relative to other bonds in the market (described in depth in this blog post). This typically happens well before a bond's maturity date. On January 23, 2020, we updated all current bond recommendations with new buy/sell/hold ratings and presented our rationale for each updated recommendation on The Super Bondcast. You can view this webcast and all of our current recommendations by subscribing to BondSavvy. One of our recommended sells was the Tiffany bonds, which had surged upon LVMH announcing, on November 25, that it had signed a definitive agreement to buy Tiffany.

The Tiffany bonds traded as high as 130, as many investors saw the combined Tiffany-LVMH as a superior credit than Tiffany standalone.  While the combined Tiffany-LVMH would be a luxury retail juggernaut, based on the limited financial information we had on LVMH, we calculated that the credit ratios of the combined company would be worse than those of Tiffany standalone. Any time a bond's price increases significantly when the credit quality either stays the same or worsens is typically a good time to consider selling a bond.

Why did we sell the Tiffany bonds?

As shown in Figure 3, we recommended the Tiffany bonds at a price of 103.01 and a YTM of 4.70%. You'll see the bond's YTM is made up of two components: 1) the benchmark Treasury YTM and 2) the credit spread, which reflects the extra yield corporate bondholders receive above the so-called 'risk-free' US Treasury yield. There's a Treasury bond that matures in 2044, very close to when the Tiffany '44 bond matures, and that bond is deemed to be the 'benchmark Treasury.' Movements in the benchmark Treasury YTM and the corporate bond's credit spread cause the bond's YTM to increase or decrease, which, in turn, causes the bond's price to decrease or increase.

As investors digested the news that Tiffany was being acquired by LVMH and piled in, the credit spread markedly shrunk from 2.71% to 0.96%. This is notable, as the credit spread for the Apple 4.45% 5/6/44 bond (CUSIP 037833AT7) was recently 0.90%. Apple is a stronger credit than the combined Tiffany-LVMH. Therefore, since the spread on the Tiffany bond was already within spitting distance of a bond with a much stronger credit profile, we didn't see much upside remaining in the Tiffany bonds. We, therefore, on January 23, 2020, issued our 'sell' recommendation at a bid price of 128, achieving a 26.08% total return in just over four months.

This is the level of discipline we use to evaluate each BondSavvy sell recommendation. 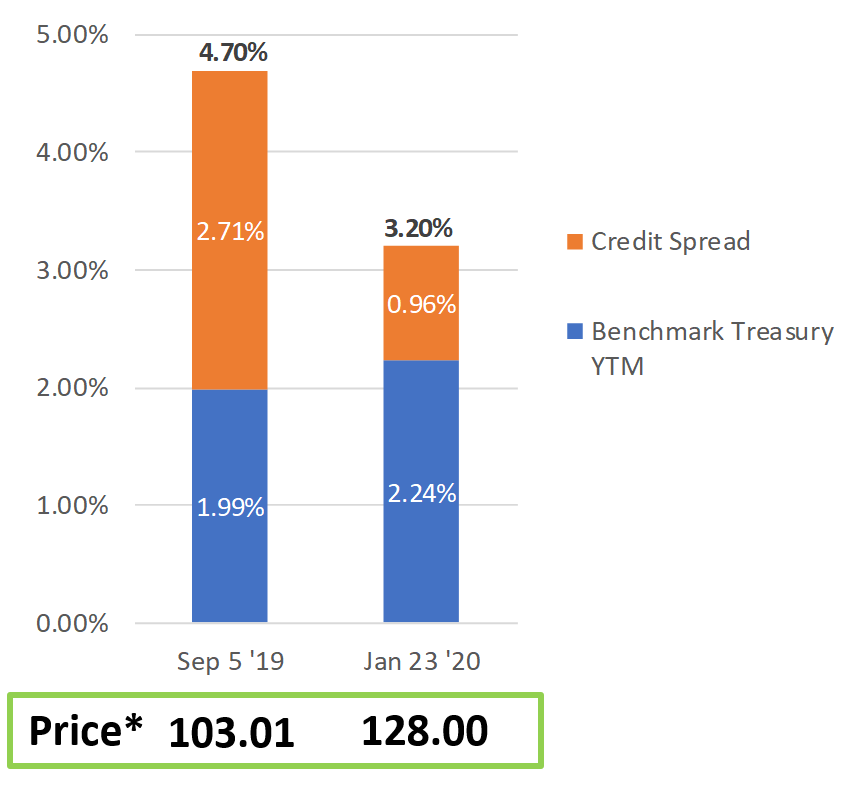 Our 26% return on the Tiffany bond investment was a combination of good analysis and, admittedly, good fortune.  While we believed the Tiffany bond offered compelling value on our recommendation date, we could not have predicted the company would be acquired and the bond's price would appreciate so quickly.  Acquisitions can work both ways.  In this case, many investors and credit rating agencies believed Tiffany-LVMH would be a stronger credit than Tiffany standalone.  This caused the Tiffany bond to surge in price.

What's important for investors to realize, however, is that investors in individual corporate bonds don't need to hit home runs on every investment to outperform bond funds and ETFs.  Given corporate bonds' lower price volatility compared to stocks, a portfolio with just a small number of home runs can achieve significantly better results than those earned by bond funds and ETFs.