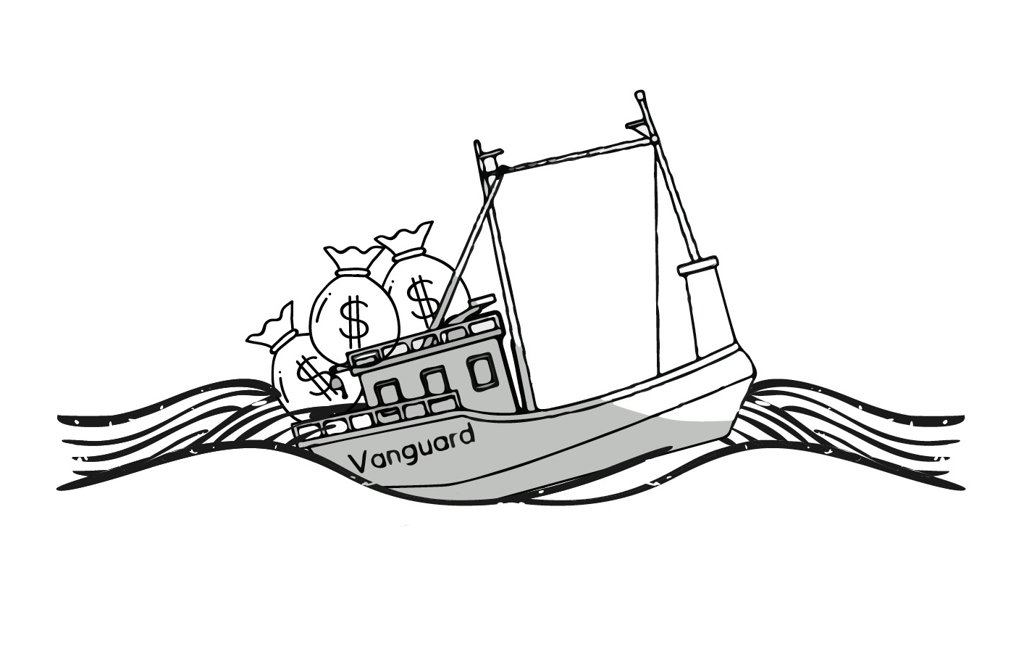 With the death of Vanguard founder John Bogle, the debate continues on his legacy: both good and bad. While few could argue his positive impact on making investing more accessible, what is less known is how high portfolio turnover within bond index funds materially increases costs and results in poor investor outcomes. For certain asset classes within these large bond funds, such as corporate bonds, the transaction fees can outweigh the reported expense ratio by a factor of 9 to 1.

The average annual return of the $204 billion Vanguard Total Bond Market Index Fund, the world’s largest bond fund, was 1.63% during 2015-2018 for the Admiral Shares class (ticker VBTLX). This was less than inflation. Many financial advisors have their clients invested in this fund and charge 1% of assets for this service. Unfortunately, after deducting advisor fees from the fund returns, the advisor made more money over the last four years than did his investor client. Nice work if you can get it.

What causes these bond index funds to perform so poorly?

Many investors have gravitated to index funds due to their perceived low costs. The VBTLX fund touts a 0.05% expense ratio, which sounds cheap. What may surprise investors is this expense ratio materially understates the costs of investing in bond funds due to the high portfolio turnover funds often have. For example, Vanguard Total Bond’s turnover has ranged from 55% in 2017 to 84% in 2015. It was 60% on an annualized basis for the first six months of 2018. To turn over 60%, or approximately $122 billion in bonds, does not come cheap. What’s worse is that funds do not disclose the impact of these trading costs since they are excluded from a fund’s expense ratio.

To estimate the impact of trading costs on Vanguard Total Bond, I have analyzed the fund’s $715.6 million of Anheuser-Busch InBev corporate bonds, one of the fund’s largest corporate bond positions as of December 31. The bond that had the median maturity date of the 21 Anheuser-Busch bonds was the Anheuser-Busch InBev Finance Inc. 4.70% 2/1/36 bond (CUSIP 035242AM8). “Turning over” or selling this bond and replacing it with another bond is costly due to bid-ask spreads, as shown in the below table: 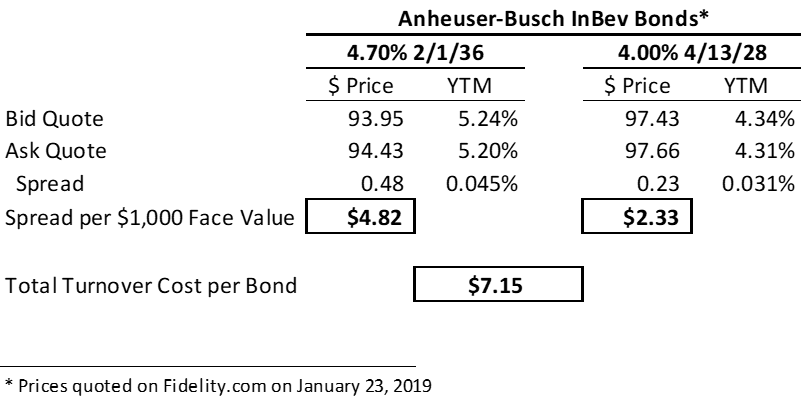 While corporate bond investing has benefited from bond trading moving online, there are still bid-ask spreads, which can add up. According to the MarketAxess Bid-Ask Spread Index (BASI) on December 10, 2018, the yield-to-maturity bid-ask spread for round-lot corporate bond trades was 0.042% or 4.2 basis points. The yield-to-maturity bid-ask spread for the ’36 bond above is similar to the BASI and implied a 0.48 spread on a dollar-price basis (bonds are quoted as a percentage of their $1,000 face value, so a bond quoted at 94.43 is worth $944.30). This means that for each bond sold, the fund incurs a cost of $4.82. It then has to replace the ’36 bond with another bond, which I am assuming to be the fund’s 4.00% ’28 bond (CUSIP 035240AL4). I assume this bond since 39.5% of the fund’s bonds have maturities of five to ten years and, given the large impact the time to maturity has on a bond’s dollar-price bid-ask spread, I wanted the example to be representative of the bonds held in the portfolio.

Since the ’28 bond has a shorter time to maturity, its dollar-price bid-ask spread is narrower than the ’36 bond, but it is still $2.33 per bond. This cost needs to be included since the fund would buy the new bond at the ask price but, when calculating the fund’s net asset value, would record the bond’s value at its bid price. Combined, the cost of turning over a corporate bond is $7.15 in this example.

With corporate bonds accounting for 24.7% of Vanguard Total Bond’s holdings as of December 31, approximate annual corporate bond turnover would be $30.2 billion, or 30.2 million bonds, given the fund’s 60% turnover rate. This would cost the fund $216.2 million per year assuming $7.15 in per-bond turnover costs. In addition to these fees, the fund incurs execution fees each time it buys and sells bonds. Per its third quarter earnings presentation, MarketAxess, a leading investment-grade corporate bond trading platform, received fees of $157 per million of investment-grade corporate bonds traded on its platform. Assuming $60.4 billion is transacted to account for sells and buys, the fees to MarketAxess would be $9.5 million.

As of December 31, Vanguard Total Bond held $50.4 billion in corporate bonds. The combined $225.7 million of trading costs represents a 0.45% trading cost ratio, which is on top of the 0.05% expense ratio the fund reported in its June 30, 2018 semiannual report. While costs to trade other holdings in Vanguard Total Bond such as Treasurys and mortgage-backed securities are lower than those for corporate bonds, funds are misleading investors by reporting a 0.05% expense ratio when the far greater expense pertains to transaction costs.

Vanguard is not alone in understating the true costs of bond fund investing, as other large fixed income mutual funds have high turnover ratios:

Investors can minimize transaction costs by owning bonds directly. An investor buying $100,000 face value of bonds currently pays $1 per bond to execute a trade on the leading online brokerages, a fee that is disclosed on the order ticket. If she held the bonds to maturity for five years, she would have incurred $100 in trading costs. This is a much better investor outcome than obtaining corporate bond exposure through an index fund such as Vanguard Total Bond, where the investor would incur approximately $2,500 in fees over five years for each $100,000 the fund invests in corporate bonds. In addition, she would be saddled with the weak returns bond index funds provide.

John Bogle was a visionary who did much good, but his impact on fixed income investing for everyday investors did not accomplish what he hoped. With 10,000 baby boomers turning 65 each day, the balance and safety fixed income investments can provide keeps growing in importance. As Mr. Bogle believed, minimizing investment expense is key, but that cannot be done with a bond index fund today.

stuart commented on 30-Jan-2019
Don't bond funds have to sell bonds that loose their respect ratings?
I had bonds in bud, ge and t and watched them drop, then loose ratings, and of course I sell at a big loss.
anonymous commented on 30-Jan-2019
So, why are the bond funds doing so much turnover of their bond portfolio if the turnover costs are so high? I assume there must be some benefit if the funds are doing so much of it.
steve commented on 31-Jan-2019
On Stuart's point, yes, many bond fund charters mandate that they can only hold bonds of a certain rating, and if a bond gets downgraded to below investment grade, there will be forced selling of that bond.

On Chuck's question, index funds typically rebalance monthly, according to iShares, which causes a lot of buying and selling. Non-index funds such as PIMCO Total Return, which had a 635% turnover ratio for the year ending 3/31/18, indicate that the fund may have a higher turnover ratio to 'achieve its investment objectives.' In my book, a 635% turnover ratio is just nuts.
bill commented on 16-Feb-2019
Great, insightful analysis, however to be fully transparent you should mention that the impact of the bid ask difference is included in the total return, if not expense ratio.
anonymous commented on 19-Feb-2019
is fabulous! It's full of incisive information and the points you make are rational and solid.You have a great talent.