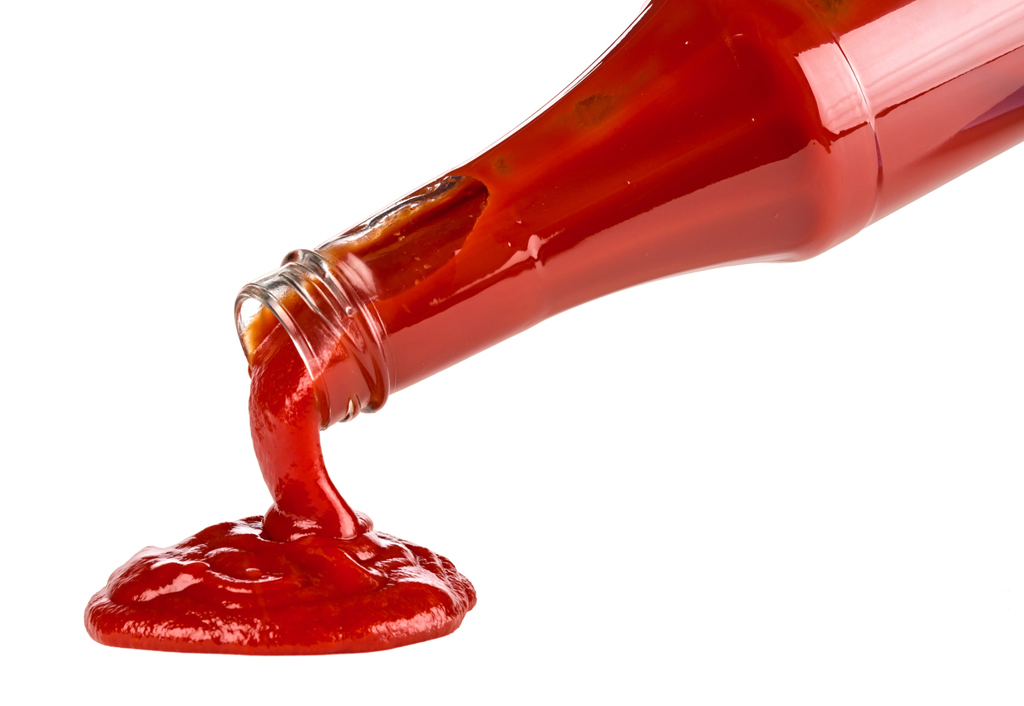 Why do investors follow Moody's and S&P bond ratings when they only tell investors a fraction of what they need to know before making a bond investment? Since corporate bond ratings don't factor in a bond's price, yield to maturity, maturity date, or the interest rate environment, they leave investors with more questions than answers. What's most troubling is the central purpose of bond ratings is to assess a bond issuer's likelihood of default, and we have found Moody's and S&P to often misrate corporate bonds. For example Kraft-Heinz and Keurig Dr. Pepper are IGINO ("Investment Grade in Name Only") bonds, as their financials simply do not support their lofty and undeserved investment grade bond ratings.


Hundreds of billions of dollars are invested into bond index funds such as Vanguard Total Bond Market Index Fund (VBTLX and BND) and BlackRock's iShares Core U.S. Aggregate Bond ETF (AGG), which say they only invest in highly rated bonds. Since these funds treat bond ratings as the gospel, they are laden with bonds of issuers such as Kraft-Heinz, Keurig Dr. Pepper and others whose financials do not support investment grade ratings. As a result, investors in these bond funds are misled about the risk profile of VBTLX, BND, AGG and other so-called high-quality bond funds. Unknowingly, investors in 'super-safe' mega bond funds such as VBTLX, BND, and AGG own junk bonds....surprise!


For these and other reasons we discuss in this fixed income blog post, we believe it's time to pour ketchup on corporate bond ratings.

Both Moody's and S&P, the two major credit rating agencies, have bond ratings methodologies that are so complicated and intricate that they often make mistakes. Seemingly endless factors contribute to corporate bond ratings, which can result in the misrating of corporate bonds. The biggest flaw in the bond ratings methodologies relates to how different factors are weighted. In many cases, a company's leverage ratio (total debt divided by a company's trailing 12 months' EBITDA) is weighed less than more fuzzy factors such as business diversification, total revenue, and innovation. We'll provide specific examples of the weightings bond rating agencies use later in the post.


We will later compare the financials of each of these companies to show the inaccuracies of specific bond ratings. Unfortunately, inaccurately gauging the credit risk of bond issuers is only one weakness of corporate bond ratings.


How Bond Ratings Miss 80% of What Counts

There is an ominous warning at the end of each Moody's Bond Report:


Yikes....perhaps if packages of cigarettes had warnings like this, there would be fewer smokers. It seems like Moody's lacks confidence in its corporate bond ratings to issue such a warning.

While this disclaimer might have been mandated by Moody's legal eagles, the authors of this note might be on to something. As noted above, credit ratings only address a small part of a bond investment's overall thesis, and this they often get wrong. If bond ratings can't even provide an accurate assessment of credit risk, then what good are they? Bond ratings weaknesses include:


While Moody's and S&P bond reports are worthwhile reading, since bond ratings ignore some of the most basic considerations in a bond investment, their overall value is questionable.


Since BondSavvy's investment recommendations consider not only a bond's credit quality but also its price, yield to maturity, maturity date, and interest rate sensitivity relative to other bonds, we believe our analysis is superior to what credit rating agencies provide.

While bond ratings have many weaknesses, they are still very important in today's US corporate bond market, as we will discuss in further detail later. It's therefore important for fixed income investors to familiarize themselves with the bond rating scales used by Moody's and S&P. Since bond ratings do not consider a bond's price, yield, or maturity date, they only speak to the likelihood of a bond issuer's default. This is known as credit risk, where bonds with a higher risk of default are deemed to have higher credit risk than bonds with a lower risk of default. As you move from top to bottom in the below bond rating scale, a bond's creditworthiness decreases according to Moody's and S&P. Today, Microsoft and Johnson & Johnson are the only two companies rated Aaa/AAA by the credit rating agencies. While credit ratings can often go years with never changing, investors must be mindful that, as time goes on, today's dominant company could be tomorrow's underperformer. For example, S&P downgraded GE from AAA to AA+ in March 2009 and, today, GE bonds are rated Baa1/BBB+.


According to page 69 (Glossary of Investment Terms) of the Vanguard Total Bond Market Index Fund prospectus, a bond must have at least a Baa3 rating by Moody's to be deemed investment grade and to be included in the Bloomberg Barclays U.S. Aggregate Bond Index, the index that VBTLX tracks. Since the Moody's rating is the rating that determines whether a bond is deemed investment grade by the Bloomberg Barclays index, errors in the Moody's rating methodology are consequential to investors in the Vanguard Total Bond Market Index Fund. As a result, since Moody's incorrectly rates bonds such as Kraft-Heinz and Keurig Dr. Pepper as investment grade, VBTLX, BND and AGG are not the high-quality funds they market themselves as.


The layperson would likely assume that bond issuers with greater creditworthiness have higher credit ratings than issuers with lower creditworthiness. This, unfortunately, is often not the case. When looking at the below table, if we had hidden the "Rating" row at the bottom, many readers would have come to the conclusion that KHC and KDP should be the lower-rated bonds due to their higher leverage ratios relative to the other corporate bond issuers. Oddly, this is not the case, as it is KHC and KDP that are rated investment grade while Expedia, Albertsons, US Concrete, H&E Equipment, and Tennant Company are rated high yield and are thus forced to pay higher interest expense than they should be paying.


The above table provides real-life examples of credit ratings that don't accurately reflect a bond issuer's default risk. The five issuers rated high yield by the rating agencies should be investment grade while KHC and KDP should be rated high yield. As we review Moody's ratings methodology below, we see that leverage ratios are but one of many pieces of information it considers when assigning bond ratings. While we don't believe a leverage ratio is the only worthwhile metric to review, we do believe it is an equalizer that can compare bond issuers across different industries. We believe it's superior to interest coverage, as interest coverage is a circular metric given that, if a bond issuer is rated investment grade, its interest coverage is going to be higher than if it was rated high yield since investment grade bond issuers pay lower coupons than high yield bond issuers. Leverage ratios are also superior to some of the fuzzy, qualitative metrics in Moody's methodology such as brand strength, product diversification, and pricing flexibility.


The Problems with Credit Ratings Methodology

Both Moody's and S&P have specific bond rating methodologies. In our opinion, these methodologies often miss the forest for the trees, as the weightings of different factors can make a company's leverage ratio meaningless, as happened with KHC and KDP. The ratings methodology changes by industry, as different factors receive different weightings as shown in the below Moody's Ratings Factors. Moody's breaks down its rating factors into 'Broad Factors' and 'Subfactors.' For example, companies in the global soft beverage industry have ratings weighted 40% toward their business profile, and that 40% is comprised of five different subfactors shown on the right side of the business profile grouping: 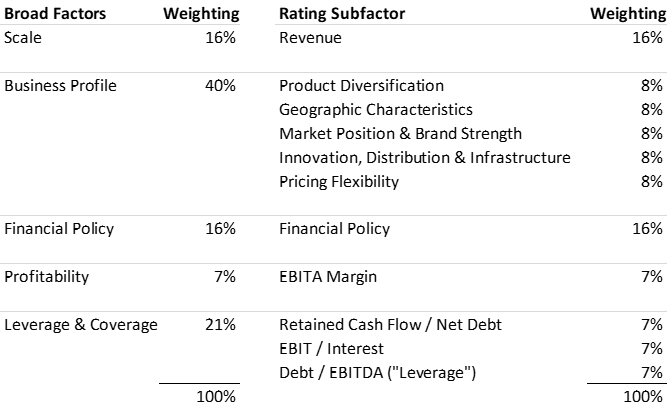 
Moody's methodology for the global soft beverage industry shows us how it got the rating for KDP so wrong. The two most important metrics from our perspective -- Retained Cash Flow / Net Debt and Debt / EBITDA -- only account for 14% of the total rating. Weighing feel-good factors such as total revenue, product diversification, brand strength and others more heavily than the most important credit metrics is misguided and results in a KDP rating that is inflated seven notches. We care about whether the company is going to have the resources to pay its interest expense and, ultimately, pay back principal on the issued bonds. Moody's and S&P ooh and aah over companies with lots of revenue, but if revenue only grew at 0.7% in 2018 as it did for KHC, scale is not going to be enough to address its bloated balance sheet.


Moody's methodology for the retail industry differs from the soft beverage industry, as there is a materially higher weighting for traditional credit metrics such as leverage and coverage. We don't have much insight on Moody's thinking on the Albertsons bonds, as Moody's had previously withdrawn its Albertsons bond ratings. That said, rating agencies such as Moody's and S&P tend to have dim views of anything touching brick & mortar retail, and this view shows through on the underrating of many brick & mortar retailers such as Albertsons.

Why Is This Important?

Due to their many shortcomings, BondSavvy doesn't believe investors should rely on corporate bond ratings to make investment decisions. It's a key reason BondSavvy makes CUSIP-level recommendations, as we not only consider a company's credit profile, but we also compare our credit analysis to the value of the bond, as determined by the bond's price and yield relative to comparable bonds.


That said, corporate credit ratings issued by Moody's and S&P have a material impact on the US corporate bond market and corporate finance in general, as they determine: 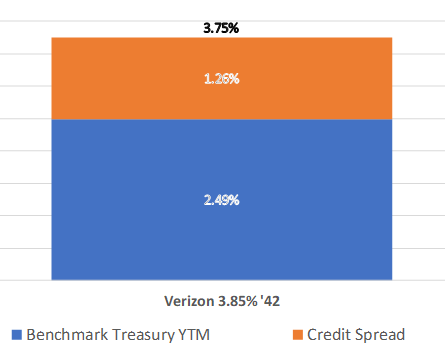 
High yield bonds differ from investment grade bonds as they are credit investments that move up and down as the creditworthiness of a bond's issuing company improves or worsens. Since high yield bonds are quoted on Wall Street trading desks on a dollar-price basis, their prices do not tick up and down based on changes in their benchmark US Treasury bond.


We illustrate this concept in the following two charts, which show the price performance of the Albertsons 7.45% '29 bond (CUSIP 013104AF1) BondSavvy recommended to subscribers in September 2017 relative to its benchmark, the US Treasury 6.125% 8/15/29 (CUSIP 912810FJ2). We see that the Albertsons bond has returned 33.6% from the September 25, 2017 recommendation date through April 30, 2019 compared to a 1.7% total return for its benchmark US Treasury. During this time, the Albertsons bond increased 15 points while the benchmark US Treasury fell 7.4 points.


This example shows how the bond price of a high yield corporate bond such as Albertsons 7.45% '29 moves independent of the benchmark US Treasury. Its ability to do so is due, in large part, to its high yield bond rating.

What Should Be Done?

Since corporate credit ratings impact such crucial factors from how much interest expense companies pay to how bonds trade in the open market, it's crucial the major credit rating agencies correct bond rating inaccuracies. While much time has been spent on developing ratings methodologies, a greater focus needs to be on tangible credit metrics on which companies can focus, knowing that, if they improve these credit metrics, they will be rewarded with improved ratings. Rewarding companies merely for their size and/or diversification is the wrong way to go and focuses companies on initiatives that often do not make them better companies or credits.


For retail investors, we believe BondSavvy's recommendations are an effective replacement for corporate credit ratings. Our analysis focuses on the metrics most closely related to an issuer's ability to service its debt. Further, since all of our recommendations are made at the CUSIP level, we evaluate all of what Moody's and S&P miss: the prices at which bonds trade, yields to maturity, maturity dates, and interest rate sensitivity. We believe it's crucial for investors to understand all of these factors when investing in individual corporate bonds.