Learn the 16 Bonds We Rate BUY 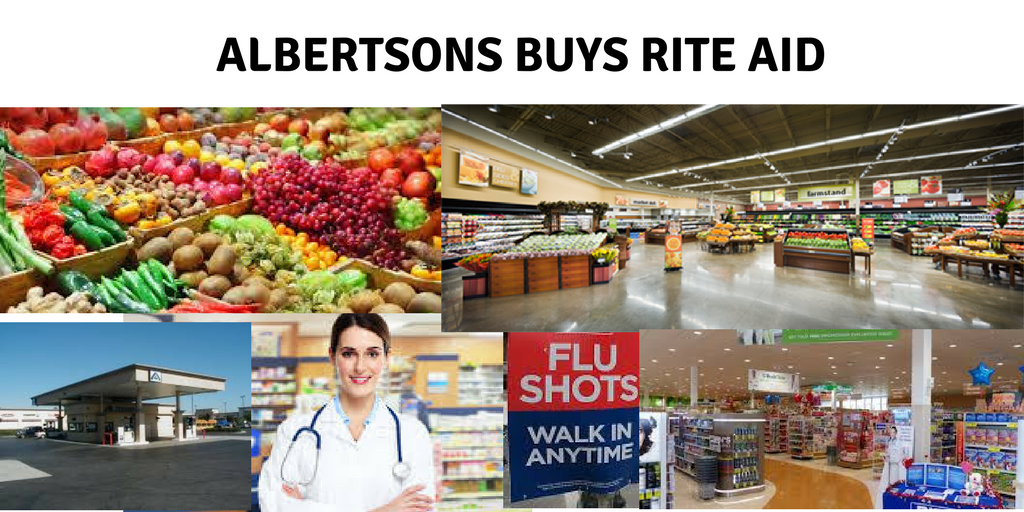 Is Albertsons' Acquisition of Rite Aid Good for Bondholders?

Update Note: On August 8, 2018, Albertsons and Rite Aid announced the termination of their merger agreement. While the below analysis no longer pertains to a combined Albertsons / Rite Aid company, it shows the level of depth BondSavvy provides to help subscribers make informed corporate bond investment decisions.

On February 20, Albertsons announced that it is acquiring Rite Aid, which now includes 2,569 pharmacies and the company's EnvisionRxOptions pharmacy benefits manager (PBM). We recommended Albertsons 7.45% '29 bonds - CUSIP 013104AF1 - to BondSavvy subscribers on September 26, 2017 and disclosed our recommendation publicly on January 3. This is the only recommendation we have publicly disclosed, so we are providing this update to both subscribers and people who have yet to subscribe.


Our goal is to recommend bonds that can achieve capital appreciation and total returns that exceed a bond's yield to maturity. A key part of this strategy is knowing when to sell previously recommended bonds so we don't have to wait until the maturity date to lock in our capital appreciation. We therefore closely monitor previously recommended bonds so we understand upside potential relative to other corporate bond investment opportunities. Understanding the impact of major acquisitions such as Albertsons/Rite Aid helps us determine if customers should continue owning the Albertsons bond.


We provide our next set of corporate bond investment recommendations during The Bondcast on March 8 @ 12pm ET. Click here to subscribe and join this exclusive call.


No change in Albertsons recommendation

We are recommending clients continue to hold the Albertsons bonds, which we recommended at an offer price of 78.40. While the bonds have already returned 14+% over the last five months (through February 20), the combined company has more upside and a more diversified revenue base than standalone Albertsons. Albertsons is delivering on the $800M of Safeway acquisition synergies it originally projected in 2015. It is projecting $375M of cost synergies in the Rite Aid deal and that its net leverage ratio ((Debt-Cash)/EBITDA) will be less than 2.75x within three years. This is by no means a slam dunk, but leverage at that level would likely get the company upgraded to investment grade from its current CCC+ rating. This could add over 20 points to the bonds, which currently trade in the mid 80s. 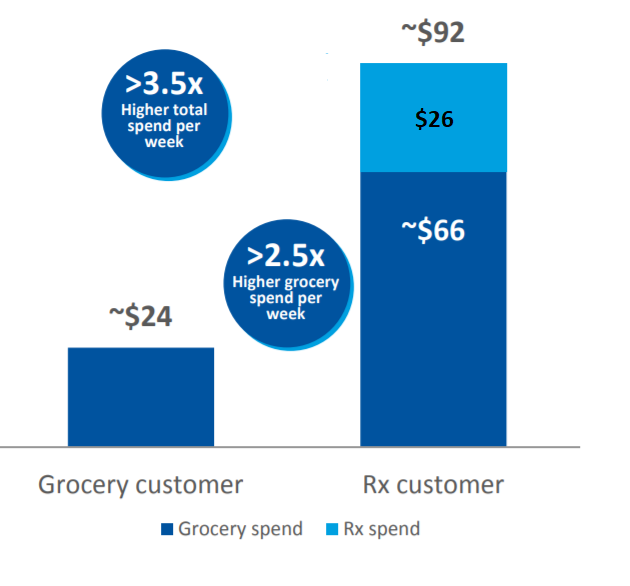 Upon closing the Rite Aid acquisition, two-thirds of the combined company's revenues will be from groceries, with the rest from the pharmacy and PBM businesses. All of these businesses are highly competitive and fairly mature, with razor-thin margins. 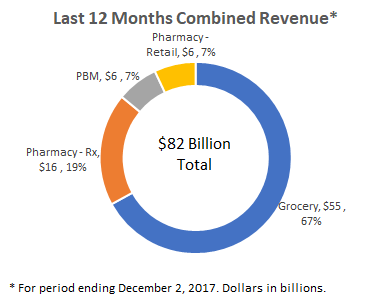 It's important to understand industry growth for each key business so we can see how Albertsons/Rite Aid compares and whether the companies are fighting for share in shrinking or growing industries. The following table shows comp store sales growth for two industry leaders: Kroger for groceries and Walgreens for pharmacy:


This table shows what Albertsons is up against. Kroger, the #2 US grocer behind Wal-Mart is projecting modest growth. While Albertsons' grocery business is projecting positive comp store growth in the current quarter, this is an industry with minimal near-term growth. Walgreens has driven strong growth in its Rx business, but Rx only represents 19% of the combined company's revenues, and we will see later that Rite-Aid has a lot of work left to re-position its Rx business.

For the PBM business, industry leader Express Scripts has provided 2018 guidance that projects 7.6% EBITDA margins and 6-9% EBITDA growth. For the nine months ending September 30, 2017, revenues were down 1% year over year. The company does not provide 2018 revenue guidance.

Our takeaway: The combined company generally does not operate in growth industries. The name of the game will be winning market share and delivering on the cost and revenue synergies the company has outlined.

Following the pending sales of 1,932 stores to Walgreens Boots Alliance ("Walgreens"), Rite Aid's stores are concentrated in eight states: California, Pennsylvania, Michigan, Ohio, New York, New Jersey, Washington, and Oregon. This creates a complementary footprint with Albertsons in the northeast and west coast of the US. We know the companies have over 20 million members enrolled in loyalty programs. Their ability to cross-promote stores in the same geographic cluster through these loyalty programs could be a strong differentiator for Albertsons/Rite Aid.

In January, both Albertsons and Rite Aid reported financial results for the nine months ending December 2, 2017. The Rite Aid financials represent the company's continuing operations, as it is in the process of selling 1,932 of its stores to Walgreens for $4.375 billion. Both companies are in similar positions with respect to leverage and interest coverage, with the combined company having a leverage ratio of 4.6x and interest coverage of 3.1x.

Figures as of, or for the period ending, December 2, 2017. "LTM" is "Last 12 Months," Leverage Ratio is long-term debt divided by EBITDA, and Interest Coverage is EBITDA divided by interest expense.

To put these ratios in perspective, Verizon has leverage of 2.7x and interest coverage of 9.3x. The Albertsons 7.45% '29 bond we recommended has a yield to maturity of 9.85% and priced in the mid 80s. A Verizon 3.7% '28 bond has a yield to maturity of 3.756% and is priced close to par. Therefore, an investor in the Albertsons bond is being compensated an extra six percentage points in yield for the extra risk due to Albertsons' higher leverage. In addition, if the Albertsons bond approaches par in the near term, an investor could sell the bond and achieve a total return materially higher than the yield to maturity. This is the BondSavvy playbook for achieving equity-like returns investing in individual corporate bonds.

Both Albertsons and Rite Aid have struggled with underlying trends in their businesses. Both companies have been reporting negative same-store sales over a number of quarters. That said, during the February 20 analyst call, Albertsons did project +0.6% same store sales growth for the quarter ending February 2018.

Albertsons Q3 results
For the quarter ending December 2, 2017, the company reported flat sales of $13.6 billion. Its same-store sales decline of 1.8% was offset by growth in fuel sales and revenue from new stores. A number of challenges continue to persist: for revenue, customer traffic fell 2.7% while ticket size increased 0.9% and, for expenses, continued emphasis on promotional pricing and increases in shrinkage (loss of inventory due to theft or operational issues).

Albertsons has a real estate portfolio valued at $11 billion. During the quarter, it entered into sale-leaseback transactions for 71 properties for net proceeds of $705 million. It used a portion of the proceeds to pay down debt, and we expect the company to enter similar transactions, on a selected basis, going forward.

Rite Aid Q3 results
Integrating a large acquisition is no easy task, and Albertsons/Rite Aid has the added challenge that Rite Aid itself has been in transition, first attempting to sell the entire company to Walgreens but then selling 1,932 stores to Walgreens. Rite Aid has closed on the sale of a number of these stores; however, all 1,932 won't be turned over to Walgreens until Spring 2018.

In the quarter ended December 2, 2017, Rite Aid reported a 5.6% decrease in revenue driven by reduced prescription reimbursement rates and lower script counts. During the Rite Aid earnings call, the company said the reduced scripts were the result of more stringent opioid sales and removal of Rite Aid from a number of network plans, which were the result of Rite Aid's formerly pending acquisition by Walgreens. EBITDA fell 28% from $215M to $154M driven by the lower revenue and the company's largely fixed expense base. Note that these EBITDA numbers are approximately $25M higher than reported since we added back $25M of corporate overhead expense that remains on the P&L but is associated with stores being sold to Walgreens.

The company also reported a 12% revenue decline in its PBM business, as Rite Aid reduced its participation with the low-income subsidized market within Medicare Part D.

To cut to the chase, Rite Aid has a full plate on how it is looking to transform its business. When the combined company projected its fiscal 2018 EBITDA, it assumed Rite Aid's most recent quarter's EBITDA of $154M is the 'new normal,' and annualized that number to arrive at $600M of 2018 EBITDA for Rite Aid.

Combined with $2.7 billion of EBITDA from Albertsons, the combined company is guiding to $3.3 billion of fiscal 2018 EBITDA. The bridge to EBITDA expansion includes $375M from identified cost savings and another $300M that would drop to the EBITDA line as the result of over $3.5 billion of revenue synergies. The biggest of the revenue synergies is attracting the higher-value Rx customers into Albertsons stores, as we previously discussed.

Our investment thesis
The best-case scenario for bondholders is that the combined company is able to execute on its cost-savings and revenue synergies initiatives and grow the company to $4 billion in EBITDA. The company projects $1.4 billion of fiscal 2018 capex and annual interest expense is approximately $1 billion. With free cash flow and potential proceeds from other property sales, the company could reduce total debt to $12 billion, in which case Albertsons would have a 3x Leverage Ratio, putting it in a good spot to be upgraded to an investment-grade credit. Obviously, this could take a number of years to happen, so, over time, we will evaluate the likelihood of this upgrade based on how the business performs and how the combined company prioritizes debt paydowns vs. shareholder dividends and stock buybacks. Stay tuned on this, but, for now, we are holding our Albertsons 7.45% '29 bonds.